Validation against ground truth data is an important step when implementing support for physical lighting quantities in a realtime or offline renderer.

In this post, a simple but effective method to assess that the physical camera model behaves as expected against ground truth data (or conversely) will be presented.

Epic Games recently published a comprehensive blog post about auto-exposure handling in Unreal Engine 4.25. The part of most significance for this post is the mention of ISO Standard: 12232:2019.

Note
It is unfortunate that no reference is made to Moving Frostbite to Physically Based Rendering 3.0 by Lagarde and de Rousiers (2013). 7 years ago, they analytically derived the 1.2 scaling factor while citing the aforementioned ISO Standard: 12232:2006. They describe a plausible Digital Still Camera (DSC) Exposure Model based on the Saturation-Based Speed (SBS) method.

The saturation based speed \(S_{sat}\) of an electronic still picture camera as given in ISO Standard: 12232:2019 is defined as:

where \(H_{sat}\) is the minimum focal plane exposure, expressed in lux-seconds (\(lx.s\)), that produces the maximum valid (not clipped or bloomed) camera output signal. This provides \(1/2\) "stop" of headroom (41% additional headroom) for specular highlights above the signal level that would be obtained from a theoretical 100% reflectance object in the scene, so that a theoretical 141% reflectance object in the scene would produce a focal plane exposure of \(H_{sat}\).

The focal plane exposure \(H\) in lux-seconds is given by the following equation:

Note
Doug A. Kerr hosts a series of articles on photography and optics. The following article are of interest for the discussed topic: Average Scene Reflectance in Photographic Exposure Metering and Derivation of the "Cosine Fourth" Law for Falloff of Illuminance Across a Camera Image 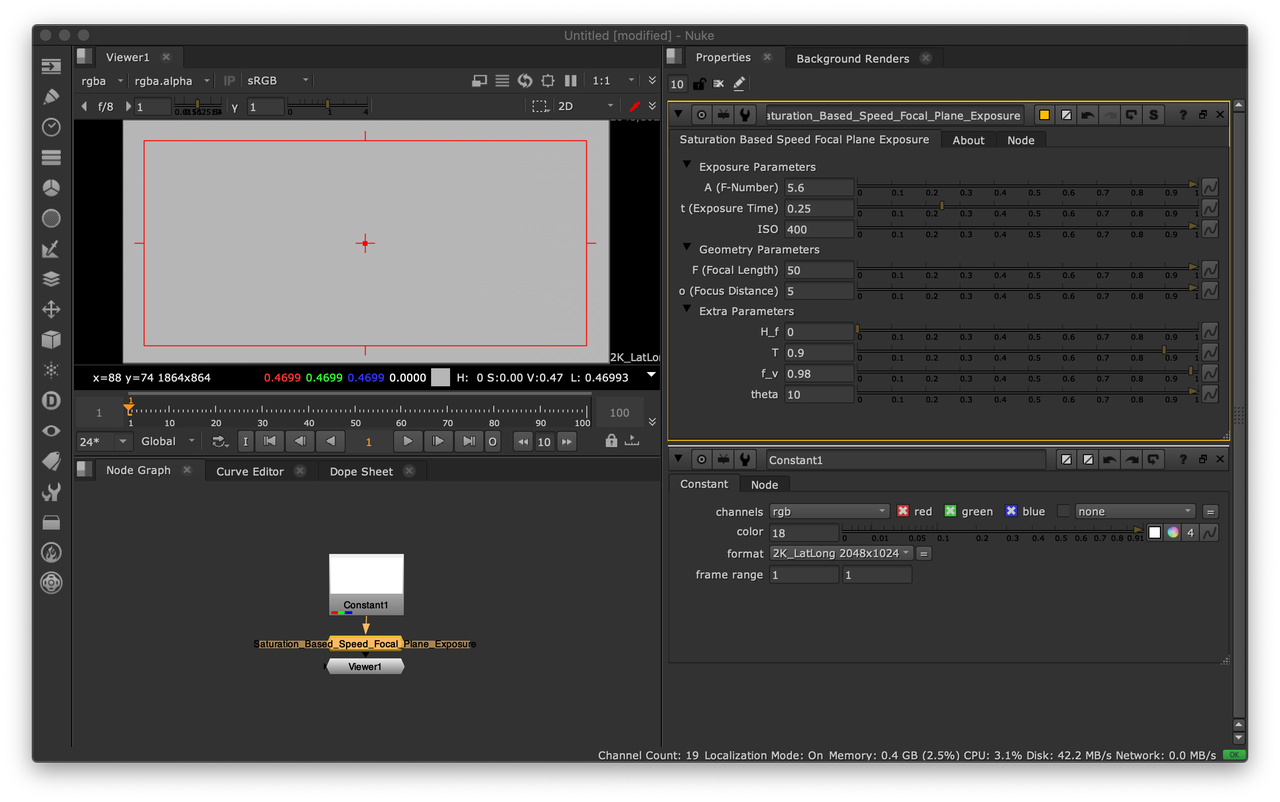 An Artist-Friendly Workflow for Panoramic HDRI by Lagarde, Lachambre and Jover (2016) describes a simple but effective process to calibrate a panoramic HDRI for absolute luminance. The only requirement is to measure the scene illuminance with a light meter during the HDRI capture.

The major advantage of this approach is that it is independent of the imaging device and thus does not require knowledge of its calibration constant \(K\).

For an equirectangular image, the solid angle \(\omega\) of a pixel is given as follows:

where \(w\) and \(h\) are the width and height of the image, respectively.

Note
Careful readers will have noticed that the last call to the colour_hdri.calibration.absolute_luminance.upper_hemisphere_illuminance_Lagarde2016 definition does not return \(\pi\). This is induced by the numerical discretization to raster space, however, as image dimensions increase toward infinity, the computed value converges toward \(\pi\), e.g. 3.1414009 and 3.1414968 for 16384x8192 and 32768x16384 sized images respectively. 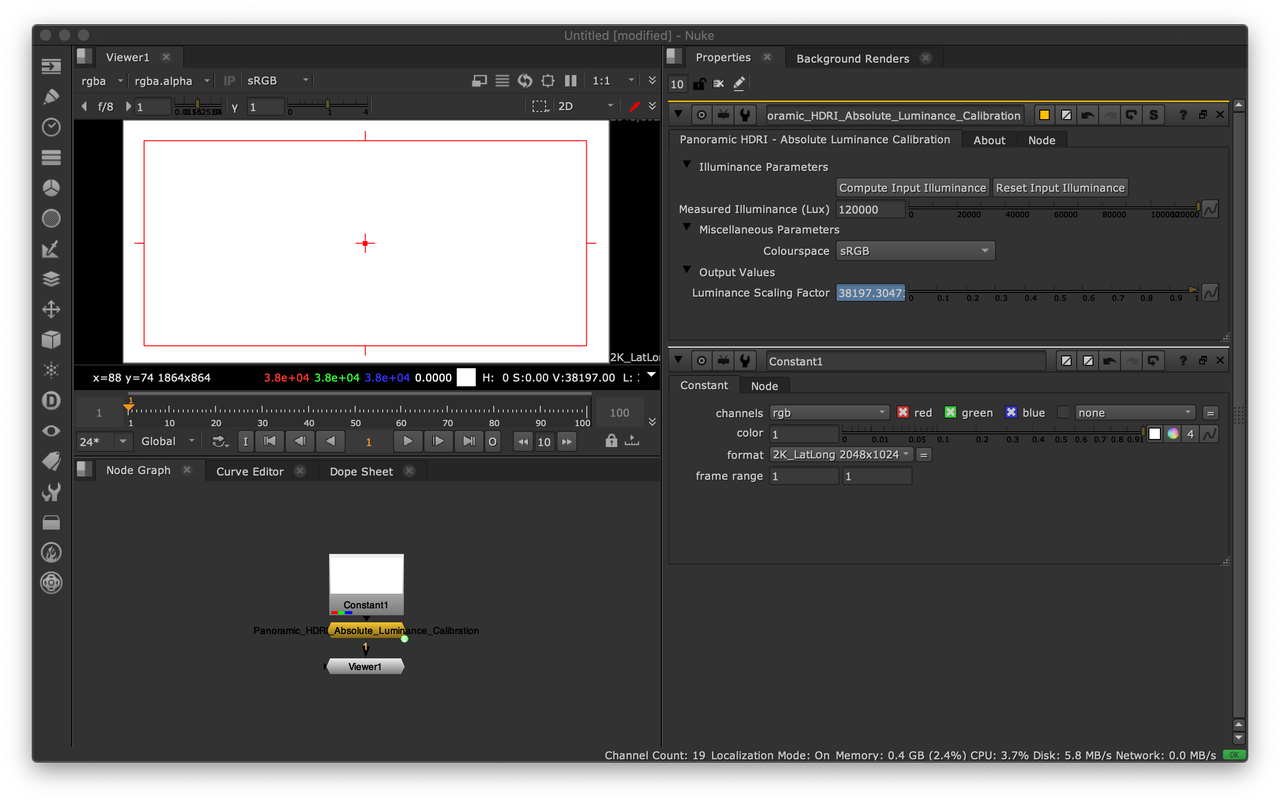 A free panoramic HDRI processed accurately is a rarity online. Most vendors sell either non-linear or clipped imagery, and when it is not clipped, photometric and colorimetric information is missing and because the creation process is unknown, the data cannot be trusted for scientific applications requiring physical lighting quantities.

Fortunately, Lagarde, Lachambre and Jover (2016) have published a trustworthy panoramic HDRI that will be used in this section.

The authors have been kindly enough to send me the original .CR2 files so that I could merge and stitch them.

Merging was performed with Colour - HDRI, specifically, by using a modified version of the Merge from Raw Files example.

Warning
The aforementioned Jupyter Notebook is an example, typical production usage would require multi-processing and use rawpy or rawtoaces.

With the various .CR2 file batches merged, the validation process involves comparing a cherry picked .CR2 file from one of the exposure batches with the corresponding HDRI scaled to absolute luminance and imaged via the DSC Exposure Model using the camera settings of the .CR2 file.

With Treasure Island, the HDRI scaled to absolute luminance is about 14% brighter (clipped luminance) than the .CR2 file. This is not perfect but considering the scaling factors involved, it is reasonably satisfactory.

Some potential source of discrepancies are:

Other tests performed with various non-public HDRI but imaged similarly have yielded better results with less error. Importantly though, the technique is dependent on good metering of the scene upper hemisphere illuminance along with non-clipped capture and correct processing of HDR imagery.

Conversely and assuming a correctly implemented (DSC) Exposure Model, this method also allows to check if the panoramic HDRI is correctly captured and processed.

Finally, I would like to thanks Sebastien Lagarde, Sebastien Lachambre and Cyril Jover for the recurring conversations on that topic during the past few years.