We were meant to write that entry since a while, and a great post by Tom Forsyth from Oculus VR triggered us in doing so.

As I was quickly reading his article, I tweeted back about the missing description of sRGB as being an RGB colourspace: a set of primaries, whitepoint and transfer functions components.

The article first description of sRGB is as follows:

sRGB is a slight tweaking of the simple gamma 2.2 curve.

While this depiction of sRGB colourspace Electro-Optical Transfer Function (EOTF) is exact, it may be confusing for non experts by omitting an explicit emphasis of the components of an RGB colourspace.

For people experienced with colour theory and science, the post title and the mention of Gamma indicates that the article will likely only involves the sRGB colourspace EOTF and its inverse.

Warning
When using the term Gamma at colour-science.org, we are always referring to a pure power function whose exponent is known as Gamma.
Note
Charles Poynton's Gamma FAQ is an extensive reference on Gamma correction.

(the broader sRGB standard also has a bunch of gamut and colour-transform specifications, but we’ll ignore those and just focus on the gamma-curve part for now, since that is what concerns us for graphics rendering)

Note
The gamut defined by sRGB colourspace should actually be of a concern if one tries to achieve photo-realistic rendering as shown by Steve Agland and us.

Terminology in a given scientific domain is key to its understanding, and this is especially true in colour science. Everybody knows what colour is but yet only a few can define it correctly, in this regard, we often cite Mark D. Fairchild:

Why should it be particularly difficult to agree upon consistent terminology in the field of color appearance? Perhaps the answer lies in the very nature of the subject. Almost everyone knows what color is. After all, they have had firsthand experience of it since shortly after birth. However, very few can precisely describe their color experiences or even precisely define color. 1

sRGB is not a bunch of transfer functions, it is an actual RGB colourspace, specified by the IEC 61966-2-1:1999 Standard. As per ISO 22028-1 Standard, an RGB colourspace is defined by those mandatory 3 components:

The ISO 22028-1 Standard definition of an additive RGB colourspace is quoted in its entirety for reference:

Note 1 to entry: A simple linear 3 × 3 matrix transformation can be used to transform between CIE XYZ tristimulus values and the radio-metrically linear colour space values for an additive RGB colour space.

Note 2 to entry: Additive RGB colour spaces are defined by specifying the CIE chromaticity values for a set of additive RGB primaries and a colour space white point, together with a colour component transfer function.

The primaries chromaticity coordinates define the gamut (the triangle of colours) that can be encoded by a given RGB colourspace.

Note
When performing computations allowing for negative values and with enough precision, a given RGB colorspace can virtually encode any colours. Colours exceeding its gamut are simply represented with negative values. 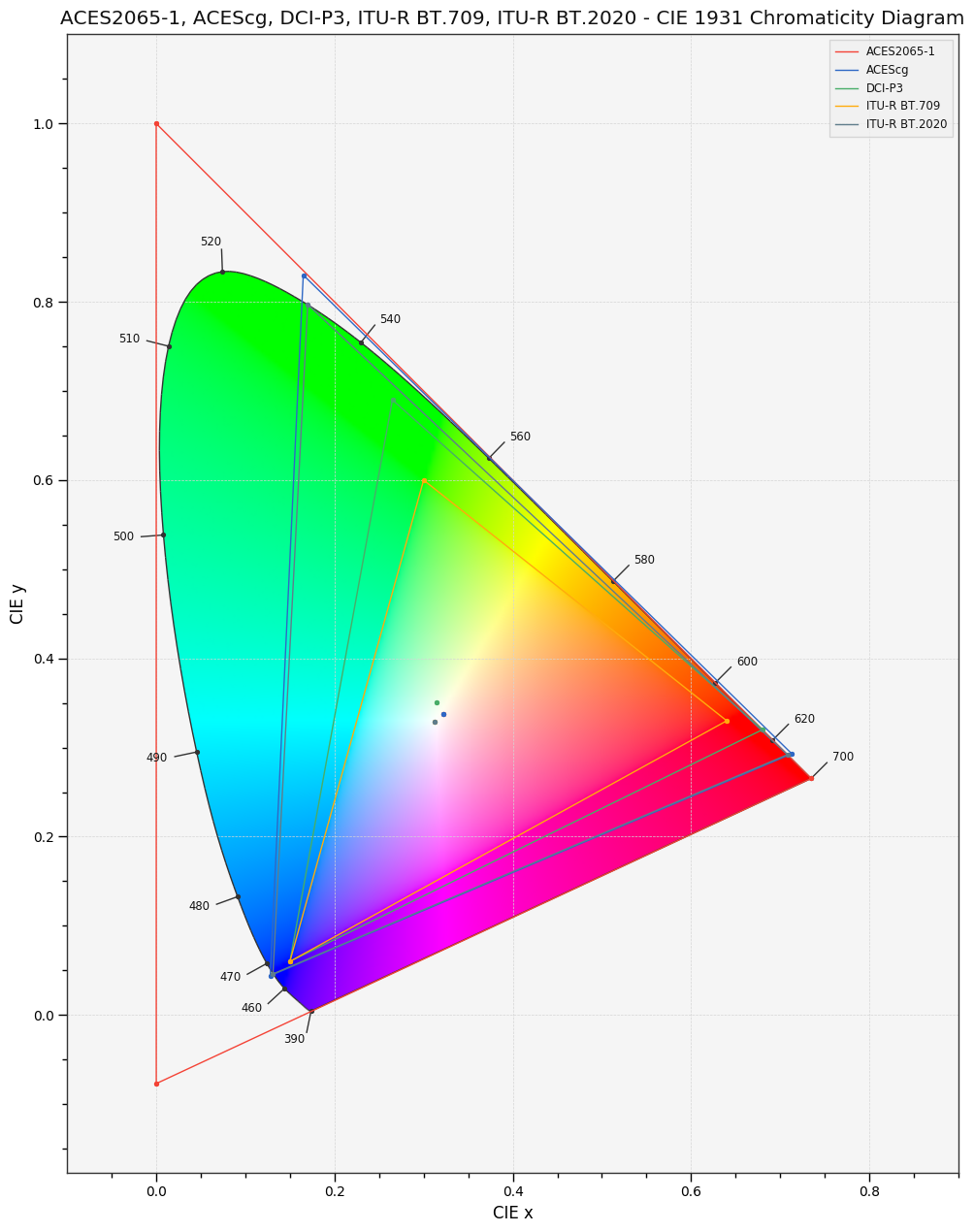 The CIE 1931 Chromaticity Diagram in the bottom right view is a 2D projection of the CIE xyY colourspace in the left view. (Colour - Analysis)

The whitepoint is defined by the CIE as:

Achromatic reference stimulus in a chromaticity diagram that corresponds to the stimulus that produces an image area that has the perception of white.

Any set of colours lying on the neutral axis passing through the whitepoint, no matter their Luminance, will be neutral to that RGB colourspace. 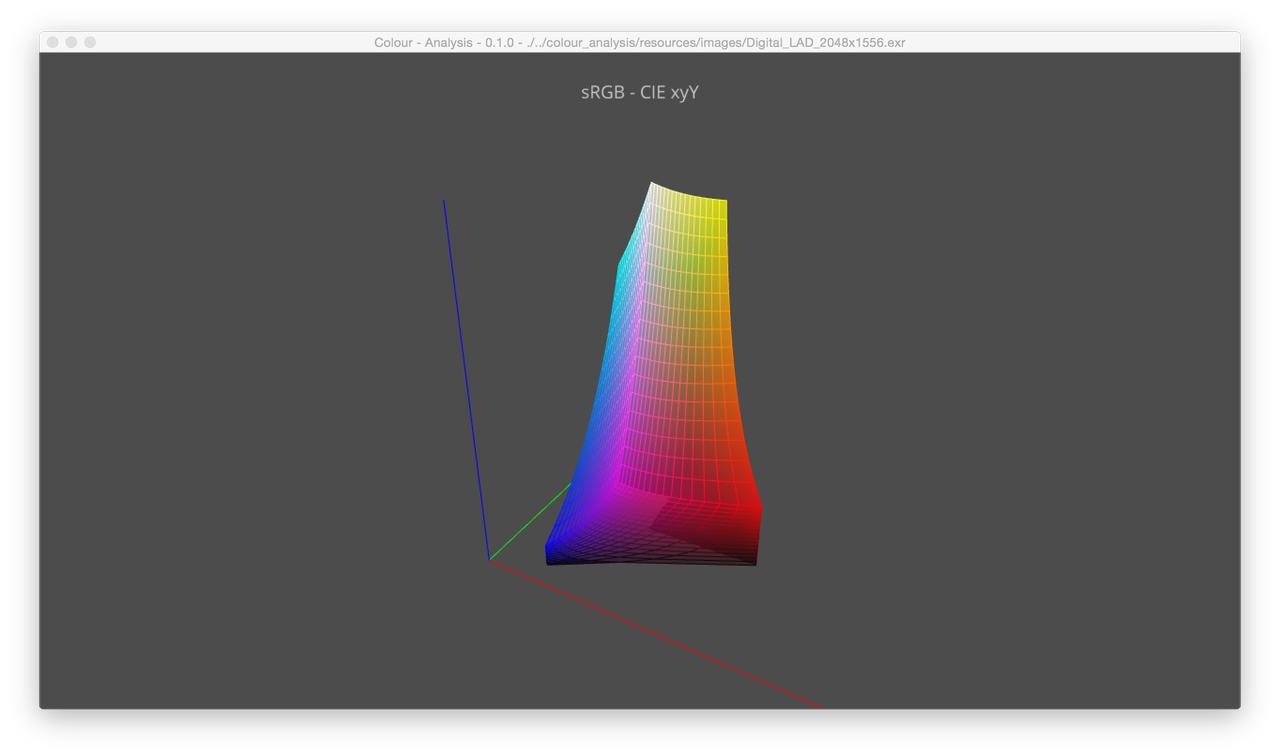 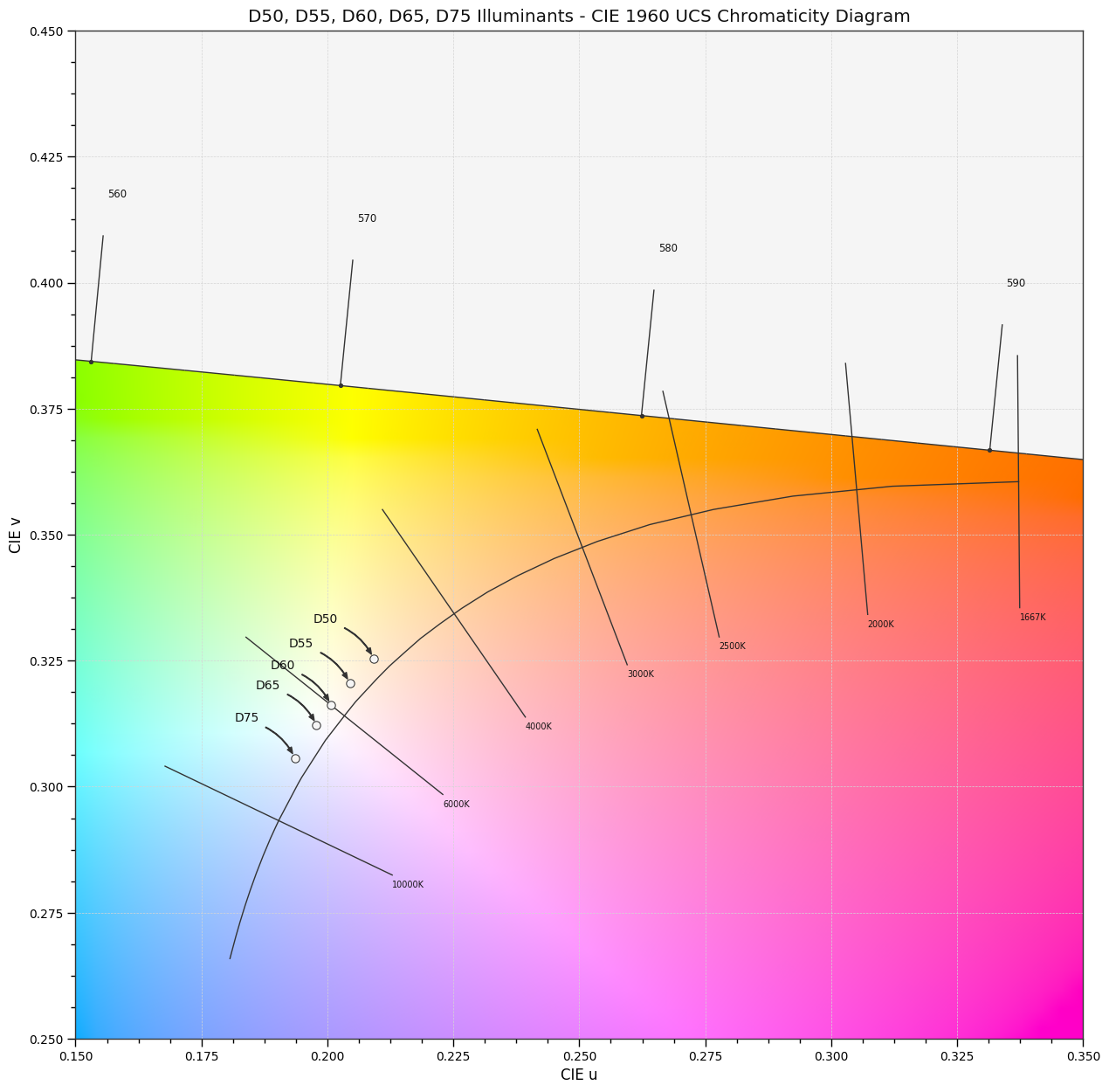 The transfer functions perform the mapping between the linear light components (tristimulus values) and a non-linear R'G'B' video signal (most of the time for coding optimisation and bandwidth performance). 2

The two common types and their inverses are defined as follows:

The Importance of Terminology

With the RGB colourspace specification components outlined, it should now make more sense why not being specific and using a clear terminology can lead to confusion and uncertainty: colour science vocabulary is complex.

I often encounter people that don’t have a clear understanding on what composes an RGB colourspace, as a result they don't properly differentiate gamut and transfer functions. The cursory terminology recurrently used online is probably the root cause for that.

Movie cameras such as those from Canon (Canon EOS 1DC, Canon CX00) use BT.709 primaries and whitepoint but encode their scene linear values with a custom log curve designated C-Log.

When one talks about sRGB alone, it should be safe to assume that he is referring to the sRGB colourspace as per IEC 61966-2-1:1999 Standard, not just cherry picked components. Unfortunately it is not the case thus in order to lessen the uncertainty and improve the terminology used, we suggest that:

In the near future it will likely become even more critical and relevant as new RGB colourspaces such as BT.2020 or the ACES encodings become mainstream.